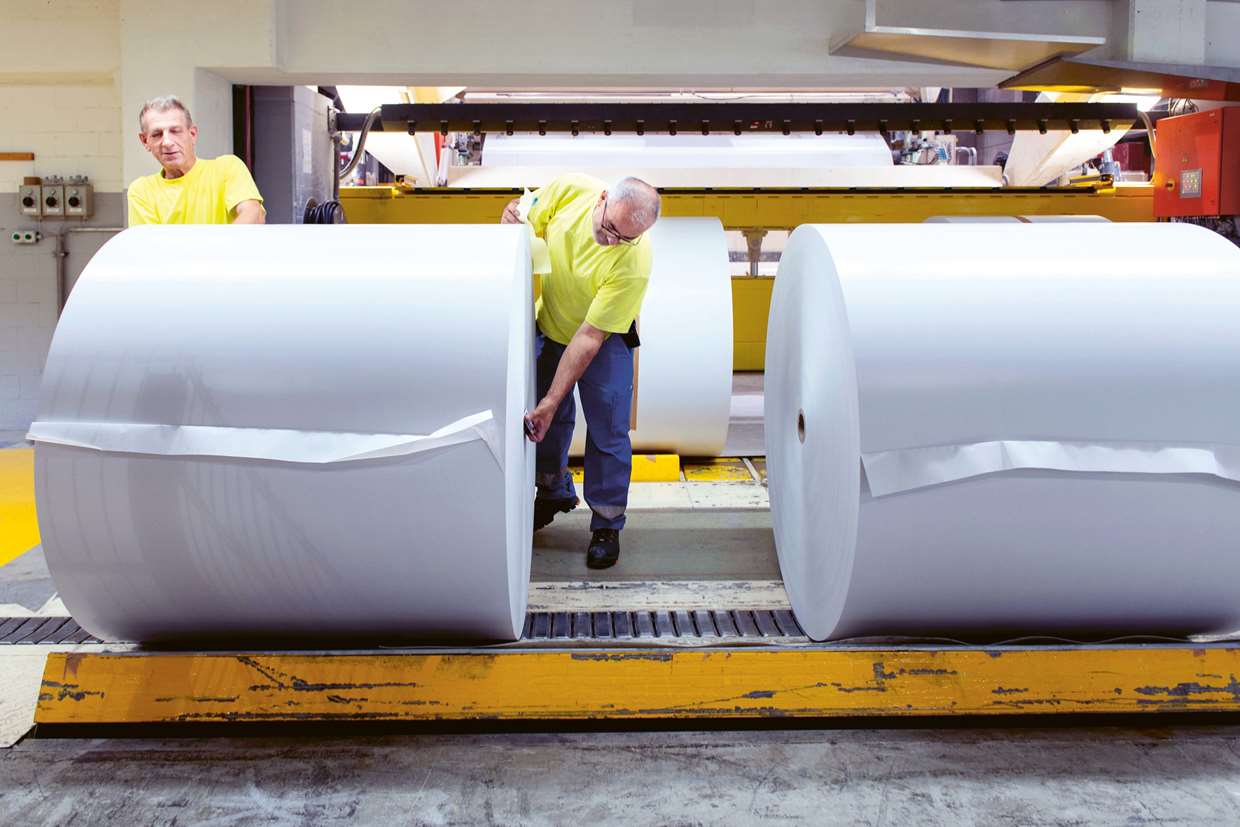 The Paper Division raised its annual net sales 10.2 % to CHF 230.9 million. But owing to steep rises in raw materials costs and a one-time impairment to its production plant, divisional EBIT for 2021 was negative at CHF –174.9 million.

The European market for graphic printing paper has been undergoing radical structural change for over ten years now. Print newspapers are losing ground to digital platforms as a news medium. The trend is accompanied by consolidation within the media market. So not only are newspapers shrinking in print run and page volume terms: numerous titles have also been merged or have closed entirely. As a result, the demand for newsprint paper has been falling in Western Europe since 2008 by some 6 – 8 % a year. The decline has also prompted adjustments to production capacities. But since such reductions take longer to effect, overcapacities have developed, and with them strong pricing pressures. This in turn has halved paper prices from their previous highs. With no medium-term easing of the present European market pressures in sight, the Paper Division has reassessed the value of its Perlen production plant and is making a non-cash-relevant one-time impairment of CHF 150 million to the assets concerned. In the present tough market environment, only those manufacturers with the lowest production costs will sustainably prevail over their competitors in the longer term. Perlen Papier is well positioned here. The company operates two advanced and very high-performance paper machines that give it a key competitive edge.

Perlen Papier is now Switzerland’s only manufacturer of graphic printing paper. As such, it has also assumed a vital function as the last domestic waste paper recycler. Sustainability is a key differentiator for CPH’s Paper Division: the carbon footprint of the paper produced at the Perlen site is only a quarter of the size of those of its European competitors. Since the beginning of 2021, customers have also been able to offset the remaining carbon dioxide emitted in their products’ manufacture via a certificated reforestation project, thereby making their paper supplies wholly carbon-neutral. Several customers have already opted for this sustainable solution.

The restrictions imposed in response to the coronavirus pandemic continued to depress demand for paper in the first half of 2021, which saw double-digit declines. But with growing vaccination of the population improving the situation and protection measures being correspondingly eased in various countries, the demand for paper began to revive, and most of the first-half declines were recouped over the second six months: demand for newsprint in Western Europe decreased 2.7 % to 3.3 million tonnes for the year as a whole, while demand for coated magazine paper increased 1.3 % to 2.6 million tonnes. Around 1.5 million tonnes of paper production capacity were withdrawn from the market in the course of the year. Some graphic paper manufacturers have also announced plans to withdraw a further 0.5 million tonnes in 2022.

With substantially less paper manufactured during the coronavirus pandemic, less waste paper was also available for recycling use. The industry thus faced a shortage of recovered paper when demand for its products picked up again in the course of the year. The situation was exacerbated by demand from the cardboard packaging sector, which used both waste cardboard and waste paper as raw materials to provide sufficient volumes of packaging for the booming online sales segment. As a result, recovered paper prices rose to historically high levels, and waste paper supply lines were tested to the extreme. Steep rises were also seen in electricity and thermal energy prices.

The Paper Division sold 505 000 tonnes of printing paper in 2021, a 15.0 % increase that partially recouped 2020’s pandemic‑related decline. Of this volume, 340 000 tonnes were of newsprint and 165 000 tonnes were magazine paper products. Price increases could also be effected in the second half of the year in view of the higher raw materials costs, and annual net sales were raised 10.2 % to CHF 230.9 million. Excluding currency factors, the net sales increase amounted to 11.5 %. Perlen Papier’s shares of Western Europe’s newsprint and magazine paper sales markets showed further slight year-on-year gains.

With supplies of the key raw material of recovered paper remaining tight throughout the year, the cost of materials was 58 % above its prior-year level. Steep rises were also recorded in energy costs. The higher expenses incurred could only be partially passed on to the market, and further price increases will be unavoidable in 2022. The division also earned other operating income of CHF 22.1 million, largely through the sale of carbon credits. Despite additional optimizations and cost-saving measures, EBITDA for the year declined to CHF – 8.0 million, and annual EBIT after a one-time impairment of CHF 150 million amounted to CHF –174.9 million. The division invested CHF 6.3 million in 2021 in maintaining its paper machines and further improving the efficiency of its production facilities. Personnel numbers declined from the 367 of 2020 to 357.

The industry’s associations expect the demand in Western Europe for wood-based graphic printing papers to suffer further high-single-digit-percentage declines in 2022. This in turn is likely to keep both overcapacities and consolidation pressures high. The Paper Division plans to invest CHF 21.6 million in further process enhancements over the course of the year. The higher paper prices should help raise net sales above their 2021 level. The situation on the recovered paper market should also return to normal. As a result, the division can expect to report a positive EBIT again for the year.