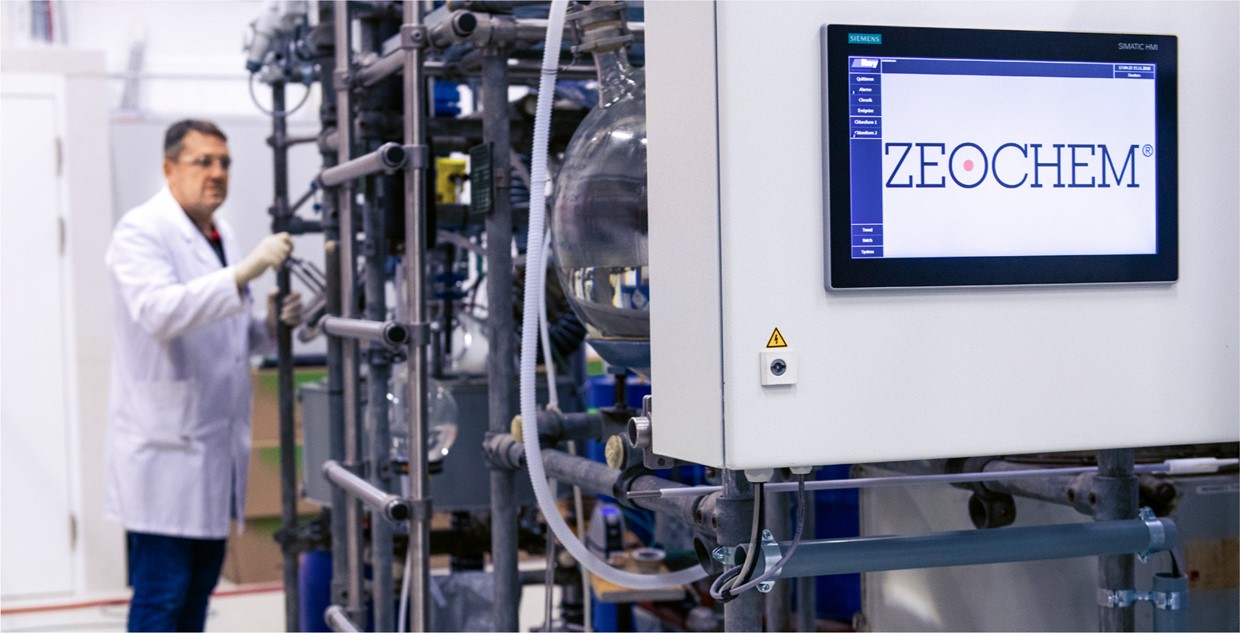 The Chemistry Division completed its repositioning by moving into its new Rüti site. Net sales for the year were raised 5.3% to CHF 79.4 million and EBIT margin increased to 7.7%.

The Chemistry Division embarked on a fundamental repositioning in 2015. The same year saw the purchase of a China-based molecular sieve manufacturer, which both facilitated access to the Asian market and paved the way for the closure of the division’s Uetikon operations. The Uetikon site was sold to Canton Zurich the following year, and the site’s previous production of standard molecular sieves was transferred to the new Chinese facility. To continue the manufacture of the other Uetikon product lines of molecular sieve powders, special zeolites and chromatography gels, the division established a new production plant in Bosnia and Herzegovina, adjacent to the new operation’s main supplier, in 2017. The new plant commenced operations at the end of that year, and ramped up production in the first quarter of 2018.

Switzerland remains home to the division’s manufacture of deuterated products, which was expanded with the integration of Armar AG, a Swiss-based deuterated products manufacturer and distribution partner, on 1 March 2018. This product segment has been based at a site in Rüti in the Zurich Oberland, which is also home to the Chemistry Division’s head office, since late summer 2018. Deuterated product manufacture began at the new location in the last quarter of the year. The production of fertilizers was ceased in summer 2017 as part of the broader closure of the Uetikon operation.

This completes the repositioning of the Chemistry Division. Its products are now manufactured at four plants in Europe, Asia and the USA, all close to their target markets. The realignment of the division and its activities has also seen a sharpening of its brand profile: since 2018, all its constituent companies have been trading under the Zeochem name. Zeochem puts its prime focus on silicate chemistry, and is the world’s Number Three producer of molecular sieves for industrial applications.

Global economic growth in 2018 was reflected in higher demand for molecular sieves, which are used in various industrial processes. The increased demand was especially strong in the energy sector, where the sieves are used to purify ethanol and natural gas. The temporary rise in oil prices prompted higher levels of investment in the energy sector, and this in turn raised the demand for such sieves, both for new facilities and to replenish existing installations.

Above-average growth was also seen in the market for lithium-based molecular sieve products, which are deployed to purify oxygen for medical and industrial use.

The Chemistry Division raised its net annual sales 5.3% to CHF 79.4 mil­lion. The acquisition and integration of the molecular sieve distribution business of Shanghai Yusheng Chemical Co. Ltd. in China and the business activities of Armar AG boosted sales results. At the same time, the division no longer benefited from the revenues of its former fertilizer business. Capacities at the US and Chinese plants were fully utilized. At the new European facilities in Zvornik and Rüti, however, production still had to be ramped up following the relocation of the plant and equipment from the Uetikon site, dampening sales growth. The division invested CHF 10.0 million in tangible fixed assets in the course of the year (compared to CHF 22.4 million in 2017), largely at the new Rüti site.

The proportion of net sales generated in the Asian focus markets was further increased to 26%. The tariffs imposed by the USA and China affected molecular sieve deliveries in both directions from the division’s plants in each country, but did not have any tangible impact on earnings results. Subject to further pricing trends, the division will be considering in 2019 whether to produce standard molecular sieves for the US market at its US facility. On the cost front, the division felt the benefits of its new strategic alignment, and EBITDA was raised 47.6% to CHF 10.7 million. EBIT was increased 60.6% to CHF 6.1 million, and EBIT margin rose to 7.7%.

Year-end personnel numbers declined from 303 to 293 employees. The job eliminations resulting from the closure of the Uetikon site were not fully offset by corresponding workforce enlargements elsewhere. By the end of 2018, almost half the division’s total workforce were employed in its Chinese operations.

With its new international structure fully adopted by the end of 2018, the Chemistry Division is turning its attention in 2019 to intensifying sales activities in its target markets. The division intends to continue on its current growth course, and will be investing a further CHF 5.9 mil­lion in facilities to this end. The bulk of this will be spent on the Chinese operation, where capacity expansion is planned, along with improvements to the waste water treatment arrangements. The division aims to post an EBIT margin for 2019 that is broadly in line with its prior-year level.